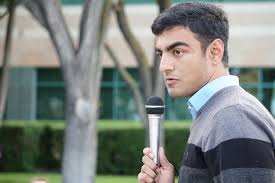 That is where this all starts. Rawal is a Dublin High School senior. He's also the vice-chair of the California High School Democrats. He is not a fan of CNN.

"I know I've said the phrase 'vendetta against CNN,'" Rawal recounts of his previous interviews on the subject. "In general, I think there's a lot of issues with the media."

From that frustration, he has been having a little fun at the network's expense.

On Friday, CNN unveiled a much-anticipated Iowa Democratic primary poll, but Rawal had already done it for them, tweeting out the numbers 20 minutes earlier. He didn't do it by hacking CNN, per se. He just figured out what CNN was going to name the web page that showed the poll results.