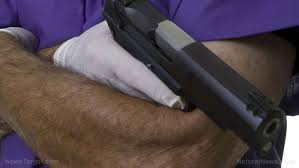 (Natural News) For the past couple of years, Leftists within the medical academic and professional community have been pushing the Democrats' agenda when it comes to controlling Americans' behavior.

Dietary 'advice' from back in the day has now become semi-mandatory as doctors and insurers work hand-in-hand to weed out behaviors they have deemed "bad" – regardless of the impact on personal freedom (and the fact that most patients, in some way, pay for much of their coverage).

Included in these behavioral changes is how patients are expected to exercise their Second Amendment right to keep and bear arms.

Doctors for Responsible Gun Ownership is one organization fighting this push to enlist physicians who assist in turning guns into a 'public health problem' so that big government, nanny-state Democrats can use that as their impetus to push for more gun control.

In a letter to Virginia physicians, the organization made an appeal to resist efforts by the Left-wing medical establishment to take part in the Democrats' push to criminalize gun ownership.

"Our profession is being hijacked in the service of gun confiscation," the letter begins. "Instead of focusing on mental health (two-thirds of gun-related deaths are suicides), and inner-city gang- and drug-related gun deaths (nearly one-third of gun-related deaths), the Bloomberg-financed and Governor Ralph 'Blackface' Northam-sponsored so-called 'gun safety legislation' is nothing more than a pile of 'citizen endangerment laws.'"

For weeks since Democrats won control over the state legislature — Northam is a Democrat so now the party controls all law-making apparatuses — they have been pledging to introduce a bevy of new gun control measures.

"Possession of guns and magazines in lawful common use will become felonious, and the removal of state pre-emption will allow each locality to capriciously decide where you can carry" a firearm, the DRGO letter said.

Right on cue, as Infowars reported Wednesday, Democrats "introduced strict new gun control measures requiring gun owners to register their firearms with the state, and also banning the possession of magazines that hold over ten rounds."