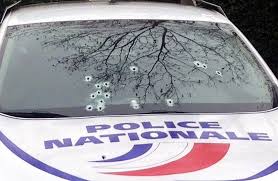 "Not a month goes by... without a murderous attack with the cry of 'Allahu Akbar' taking place on our soil.... But what is the point of fighting the effects of Islamism if we do not tackle the origins of this ideology of death? On that front, however, denial continues to compete with naiveté. Nothing has changed in the last five years. On the contrary.

"In the name of diversity, non-discrimination and human rights, France has accepted a number of blows to its culture and history... Islamists are a hot-button issue. They continue the fight which, even without weapons, has all the allure of a war of civilizations. Is the famous 'Charlie spirit', which some people thought was blowing after the January 2015 attacks, just an illusion?"

France has been marking the fifth anniversary of the deadly jihadist attack on the satirical magazine Charlie Hebdo, which took place on January 7, 2015. Last month, French Senator Nathalie Goulet warned that more attacks were likely. "In France we have a serious problem and we need to do more to prevent extremists from acting. As it stands, there will be more attacks," said Goulet said.

There are believed to be 12,000 radical Islamists on France's terror watch-list, "however only a dozen are thought to be under 24-hour surveillance."

This week was marked by yet a new string of Islamist terror attacks: police injured a knife-wielding man on a street in the northeastern city of Metz, two days after a suspected Islamist radical in the Paris suburb of Villejuif stabbed a man to death, an act that prosecutors are treating as a terror attack. In both incidents, the assailants shouted "Allahu Akbar." This type of attack was dubbed "ordinary jihad" in a Le Figaro editorial this week.

On January 7, 2015, the cartoonists and journalists Cabu, Charb, Honoré, Tignous and Wolinski, the psychoanalyst Elsa Cayat, the economist Bernard Maris and the policeman Franck Brinsolaro fell under the bullets of the jihadist brothers Chérif and Saïd Kouachi. Charlie Hebdo's 2020 anniversary issue commemorated the massacre and slammed the "new gurus of monolithic thinking" who are trying to impose politically correct censorship.

5 Great Things to Do in Key West, Florida