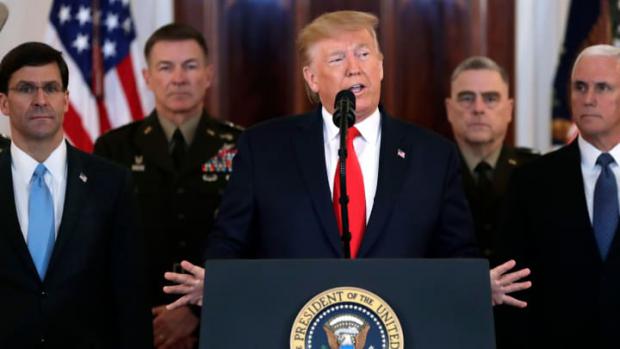 President Trump declared Wednesday that Iran "appears to be standing down," in the wake of missile strikes on American bases in Iraq that he said resulted in "no casualties."

"Iran appears to be standing down, which is a good thing for all parties concerned," he said, in remarks from the White House the morning after the attacks.

"The American people should be extremely grateful and happy," Trump said. "No Americans were harmed in last night's attack by the Iranian regime."

He added: "No American or Iraqi lives were lost."

While the attacks were the latest escalation with Tehran in the aftermath of a U.S. drone strike that killed the top Iranian general, they appeared to open the door to reducing tensions after it became clear that no American forces were killed.

"All is well!" the president tweeted Tuesday night. "Missiles launched from Iran at two military bases located in Iraq. Assessment of casualties & damages taking place now. So far, so good! We have the most powerful and well equipped military anywhere in the world, by far!"

"I will be making a statement tomorrow morning," he said.