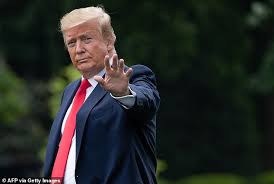 Despite the U.S. government saying a letter describing plans for a mass troop withdrawal was a premature draft, Iraq's prime minister says he has received the missive and will hold the Pentagon to it.

Defense Secretary Mark Esper insisted Tuesday during a press briefing that 'our policy has not changed. We are not leaving Iraq.'

The letter described 'repositioning' of U.S. troops and a plan to shift forces 'out of Iraq.' Gen. Mark Milley, chairman of the Joint Chiefs of Staff, told reporters Monday that it should not have been released.

'We don't deal with statements in the media,' the official told the newspaper. 'As a state, we deal with the official letters that we receive, and we will act in accordance with this letter.'

At the White House, President Donald Trump said he's open to a troop pullout, but not now. ' At some point we want to get out, but this isnt the right point,' Trump told reporters in the Oval Office. He added that a mass evacuation would be 'the worst thing that could happen to Iraq' with an aggressive Iran on its doorstep.