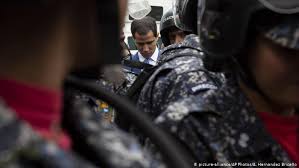 Between Turkey, Venezuela and efforts to remove Donald Trump from office, it's been tough sledding for coup d'états over the last several years.

In the case of Venezuela, would-be President Juan Guaido's journey is just sad at this point - after the opposition leader said on Sunday that police prevented him from entering the country's National Assembly, only to be reelected for a second term as speaker of parliament hours later.

Guaido has led opposition to Venezuela's socialist president Nicolas Maduro for the past 12 months and had hoped to be confirmed in the post in a key vote.

When he arrived for the special parliament session, police prevented him from entering. -DW

At one point he tried to jump the fence, only to be repelled.

"This is unprecedented!" Guaido told a guard amid a heated exchange.

"The regime is kidnapping and persecuting deputies, militarizing the Federal Legislative Palace, preventing access and blocking entry to the free press," he later tweeted.

"This is the reality in Venezuela: the desire for change in the face of a dictatorship that continues to persecute."