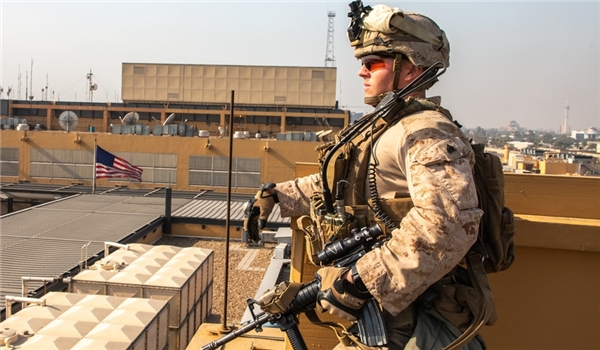 The popular forces urged the Iraqi security forces in a written statement on Saturday to avoid getting close to the areas where the US military bases are located.

Abu Ali al-Askari, security leader of the KH tweeted that "brothers in the Iraqi security services must stay away from the bases of the American enemy for a distance of no less than a thousand meters, starting from Sunday evening".

"The leaders of the security services must abide by the safety rules of their fighters and not allow them to be a human shield," al-Askari warned.

Meanwhile, the US-led coalition confirmed that rockets fell near two Iraqi army bases in Baghdad and Balad, used by American troops, on Saturday. No US military casualties resulted from the shelling, it added.

Earlier this week, Washington Embassy in Baghdad barely escaped a takeover by Iraqi protesters following a series of US airstrikes that killed 28 popular forces a week ago. The demonstrators chanted "Death to America" and even managed to set checkpoints on fire, calling for the expulsion of the US ambassador and American military servicemen from the Arab country. Washington blamed the Kirkuk's attack on the Iran-allied forces, but Tehran has denied any involvement.