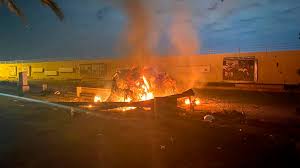 The President of the Council on Foreign Relations Richard N. Haass says that "the world will be the battlefield" following a dramatic escalation in tensions between the United States and Iran.

Fears of a wider war are rising after Iran's Quds Force General Qasem Soleimani was killed during an airstrike near Baghdad's airport.

Haass warned that those who thought any war with Iran would look similar to previous military campaigns were being incredibly naive.

"Make no mistake: any war with Iran will not look like the 1990 Gulf war or the 2003 Iraq wars. It will be fought throughout the region w a wide range of tools vs a wide range of civilian, economic, & military targets. The region (and possibly the world) will be the battlefield," tweeted Haass.

He went on to assert that developments would lead to Iraqi authorities exerting great pressure on the U.S. to leave their country.

"One sure result of the US strike is that the era of US-Iraq cooperation is over. The US diplomatic & mil presence will end b/c Iraq asks us to depart or our presence is just a target or both. The result will be greater Iranian influence, terrorism, and Iraqi infighting," said Haas.