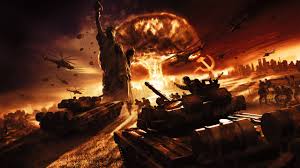 Iran has vowed to exact a 'crushing revenge' on American forces in retaliation for the killing of Quds commander Qassem Soleimani - leaving the Middle East on the brink of a conflict that could quickly spiral into World War 3.

The Iranian National Security Council is currently meeting in Tehran - chaired by Ayatollah Khamenei himself for the first time ever - to consider its response.

At their disposal is the world's 13th most powerful military, a host of militia groups spread across the Middle East, proxy-forces such as Lebanon's Hezbollah and Yemen's Houthi rebels, and allies like Syria's Bashar al-Assad.

Targets in their crosshairs are likely to include US troops and military bases in Iraq and Syria, Israeli forces in the Golan Heights, tankers in the Strait of Hormuz, and Saudi Arabia's oil infrastructure.

While initial strikes are likely to be limited, they could herald a tit-for-tat series of events - drawing in Russian forces stationed in Syria defending a key Iranian ally in Bashar al-Assad, and Turkish forces fighting in the country's north.