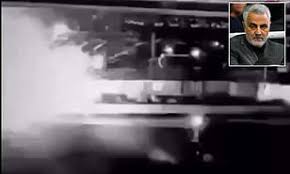 This is the moment Iranian Quds force commander Qassem Soleimani was blown up in a US drone strike at Baghdad airport ordered by President Trump.

CCTV footage filmed close to the airport and shared by Iraqi TV station AhadTV shows a large explosion as one of the two cars was destroyed by precision missiles fired by a Reaper drone early on Friday morning.

Soleimani's body was torn to pieces in the attack and a senior politician said his remains could only be identified by the ring he wore on his left hand.

A grisly image which circulated on Iranian media in the aftermath purported to show the ring on Soleimani's bloodied severed hand and bears strong similarities to the ruby ring worn by him in other photos, however it is not a precise match and fellow victim Abu Mahdi al-Muhandis also wore similar jewellery.

Also among the ten dead were to two Islamic Revolutionary Guard generals - Brigadier General Hussein Jafari Nia and Major-General Hadi Taremi  - along with Colonel of the Guards Shahroud Mozaffari Nia.

A senior leader of this week's attacks on the US embassy, Abu Mahdi al-Muhandis, was also among the dead - vaporized after being struck by one of four American guided missiles fired by a Reaper drone.