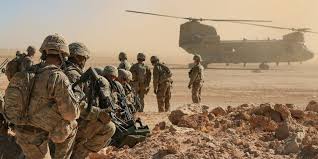 Three U.S. defense officials told NBC that the troops would be dispersed across several military bases in Iraq and Kuwait.

The deployment of one brigade of the 82nd Airborne Division, approximately 700 troops, has already arrived in the Middle East.

The U.S. State Department urged all Americans citizens to leave Iraq on Friday.

Tehran on Friday deployed Grumman F-14 Tomcat fighter jets to its borders hours after Soleimani was killed by a U.S. airstrike at Baghdad international airport.

It was also reported that the Islamic Revolutionary Guard Corps (IRGC) "has put all of its ballistic missile bases on high-alert. #IRGC affiliated news media of #Iran's Islamic Regime claim that they are ready to launch missiles at several airbases which host #USAF airplanes in #UAE, #Qatar, #SaudiArabia & #Jordan!"