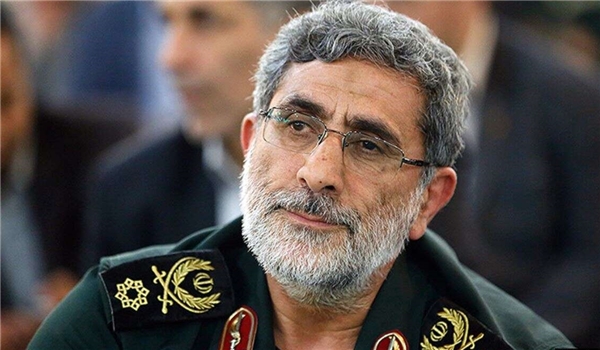 In a decree on Friday, Ayatollah Khamenei appointed Brigadier General Qaani as the new Commander of IRGC's Qods Force, noting that Qaani has been one of the prominent commanders during the eight years of Sacred Defense and has been accompanying martyr General Soleimani in the past several years in the region.

"The plan of the Force will exactly be the same as the plan during martyr Soleimani's tenure," underlined the Supreme Leader.

Lieutenant General Soleimani was martyred in a targeted assassination attack by US aircraft at Baghdad International Airport early on Friday morning.

"General Qassem Soleimani has been martyred by the US helicopters after lifetime efforts," the IRGC said in a statement early Friday morning.

The airstrike also martyred Abu Mahdi al-Muhandis, deputy commander of Iraq's Popular Mobilization Forces (PMF), or Hashad al-Shabi. The PMF media arm said the two were martyred in an American airstrike that targeted their vehicle on the road to the airport.

A PMF official said seven people were martyred by missiles fired by the US helicopters at Baghdad International Airport.