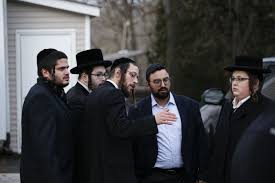 With police only able to do so much, while also being handicapped by state and city officials, local residents have decided they aren't going to wait around helplessly for the next act of violence.

To be clear, New York is not an open-carry state, so these expressions of their constitutional rights will almost certainly lead to government reprisal. But that's a price they are obviously willing to pay, and good for them for putting their families over the wishes of Chris Cuomo and company. With the surge in hate crimes against Jews in New York, mostly carried about by other minorities, the state leadership has mostly ignored the problem. They've made excuses and tried to pass the buck by incoherently blaming Trump for the violence, even though those committing it are almost certainly not followers of the President give the demographic and ideological realities at play.

What's taking place in New York is a sick evolution of racial politics, whereby peaceful Jews simply trying to live their lives are being targeted by African Americans for grievances that don't make any sense. Those grievances have largely been pushed by a small subset of outspoken individuals who've convinced others that the Jews are the cause of their problems, usually citing the purchase of property and gentrification of neighborhoods.