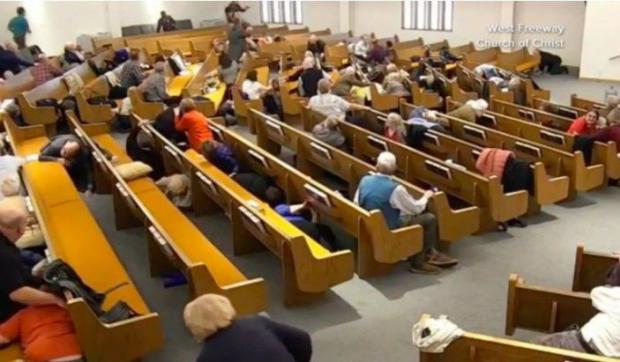 The shooting occurred around 10 a.m. CT and according to Lt. Governor Dan Patrick, the incident was over within six seconds thanks to the quick response from armed parishioners.

Absent one law passed earlier this year, an untold number of congregants would've been killed.

Texas Gov. Greg Abbott signed eight bills enhancing gun rights into law in June. On September 1st they all took effect. Senate Bill 535 in particular allowed Texans to carry guns in churches, synagogues and other places of worship, unless otherwise banned by those places with proper signage.

Meanwhile, here's what the liberal brain trust had to say about people being armed in places of worship before yesterday's tragedy:

After the Sutherland Springs Church shooting in Texas, Biden said that the man who shot the attacker should not have been armed

Why does Biden want Texas churchgoers to be unarmed?https://t.co/fv1mYG8rm8

Years of defending 2A to liberals, but I say "don't bring guns to church" and I'm a pinko. Conservatives really have lost their minds.

#Texas is a state so out of touch with reality that it makes your head spin. A day after the #Odessa shooting, the state did not restrict gun access, it EXPANDED it. Texas Senate Bill 535 now even allows people to bring their guns to churches. To protect them, mind.