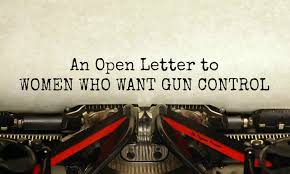 Dear Women Who Are Fighting for Gun Control:

This letter is to all the "Moms Who Demand Action" and the women who are part of groups like Everytown for Gun Safety.  Please give me just a few moments of your time so I can talk to you, one woman to another.

We truly do want the same things. This is not an attack on you or the things you believe in, but rather, a discussion of empowerment.

I am sure that your heart is in the right place when you tell us that guns should be banned for the good of humanity.

You see the aftermath of horrific events like the Pulse nightclub shooting and the concert in Las Vegas and school shootings and you are horrified. I am too.

You are convinced that the world would be a better place with no guns at all. I am not.

You hear the impassioned pleas from celebrities like the ones in the video below and you are inspired to take action to make America a safer place.

But I hear this and the hypocrisy of it makes me sick.

These people in the videos who are begging for our Second Amendment rights to be abolished to do not have anything in common with women like you and me. They are protected by gated communities with armed patrols. They have burly bodyguards. They have monitored home security systems that would rival that of the Louvre. Many of them are insulated and protected in their homes, their cars, and when they're walking down the street.

Or do you have nothing more than a locked door and the hope that the police will arrive in time standing between you and a home invader? Do you put your keys between your fingers when you walk through a parking garage, hoping that if someone tries to rape you that you'll be able to gouge his eyes with it and run screaming for help? What would you do if someone broke into your home and was heading to your child's room with the intent of doing harm? Would you just hide and pray that the stall door of the bathroom where you were hiding didn't get kicked open by the criminal who had just opened fire on the restaurant you were in?

What is your plan?

I believe that your premise (personal safety) is valid but your conclusion (gun control) is wrong.

I beg you to read the following with an open mind.

Hiding, calling 911, and hoping you can inflict enough damage to protect yourself from someone, bigger, stronger, and meaner than you is not much of a plan.

If you really, truly want to be safe, equal, and empowered, what you need to do is get a gun, learn how to use it, and carry it everywhere. Encourage your daughters to do the same. Treat your girlfriends to a day at the range instead of a day at the spa. Give your mom a gift certificate for shooting lessons. Campaign to banish gun-free, target-rich zones, and stop relying on a flimsy lock and 911 for your personal safety.

There is no greater equalizer against a culprit intent on doing you harm than a firearm in the hand of a woman who is trained and willing to use it.

I can tell you from personal experience that my daughter and I are unharmed today because I was carrying a gun one night back in 2016.

It was after supper when the dogs in the back began barking. A car had come down my long private driveway and pulled to a stop. I live way down a long country road, and my driveway is the last one on the road.  Uninvited visitors are extremely rare. We're too far out there for the usual smattering of Jehovah's Witness, little girls selling cookies, and neighborly drop-offs of homemade jam.

I looked outside and saw that two men had gotten out and approached my daughter while one waited in the driver seat of the car. My daughter, 15, was doing some of the after dinner chores. I had a bad feeling immediately. I knew it, because I was adamantly told by that gut instinct that doesn't just hint something is wrong, but pounds your heart like a drum to get your attention, and screams it inside your head.

I stopped for just long enough to grab my loaded Glock 19 and for the first time since purchasing it, I racked the slide and chambered a round for a reason other than target practice. For the first time, I did so because of another human being. I did so because there were 3 men out there with my child and they were bigger than both of us. They were undoubtedly stronger, and we were outnumbered, and I knew that there was the potential for something bad to happen.