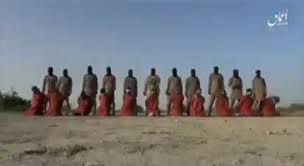 The Islamic State has released a video which purportedly shows the brutal execution of 11 blindfolded Christians in Nigeria, the day after Christmas, in revenge for the killing of ISIS leader Abu Bakr al-Baghdadi and IS spokesman Abdul-Hasan al-Muhajir, accordign to Ahmad Salkida - a journalist who was first sent the video.

"This is a message to Christians all over the world," says a masked man from the Islamic State West African Province (ISWAP), in the 56-second clip released the Amaq news agency, a platform for Islamic State propaganda.

"We killed them as revenge for the killing of our leaders, including Abu Bakr al-Baghdadi and [IS spokesman] Abul-Hasan al-Muhajir."

The footage, filmed in an unidentified outdoor area, shows one captive who is shot dead while the other 10 are pushed to the ground and beheaded, according to the BBC.

Here is a clip of the video which cuts off before the reported executions.