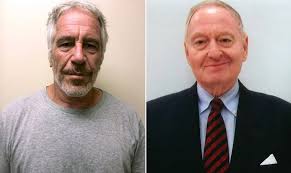 Steven Hoffenberg was arrested by FBI agents in Arkansas in 1996, after regulators accused him of defrauding investors. The former business partner of Jeffrey Epstein in Towers Financial spent 18 years in jail for the largest Ponzi schemes in history prior to Bernie Madoff's crimes. But the notorious sex criminal got away scot-free. Why? In a series of new and exclusives conversations, Hoffenberg reveals the real reason he evaded justice in one of America's largest Ponzi schemes—he was an international spy.

That's the explosive claim of former Epstein colleague and friend, Steven Hoffenberg, who confirms that Epstein was indeed a top-level agent for the Israeli Mossad, as first confirmed in the best-selling book Epstein: Dead Men Tell No Tales.

Ghislaine Maxwell (right) with Prince Andrew and Virginia Roberts in 2001.

In a series of bombshell interviews with me following the release of the book, Hoffenberg confirmed that not only does he have first-hand knowledge of Epstein's work as an agent of the Mossad, as described in the book; but also, his former cohorts Prince Andrew and Maxwell are still actively working to keep his explosive secrets.

Hoffenberg famously worked as Epstein's business partner at the ill-fated Towers Financial Group in the 1990s. In 1993, the business collapsed as a multi-billion-dollar Ponzi scheme was exposed. Hoffenberg pleaded guilty and went to prison in 1995, but Epstein got off scot-free.

Steven Hoffenberg is the former chairman of Towers Financial Corporation, a debt collection agency, that he used in a Ponzi scheme. He was the owner of the New York Post. The firm collapsed in 1993, and in 1995 Hoffenberg pleaded guilty to bilking investors out of $475 million. The SEC considered his financial crimes as "one of the largest Ponzi schemes in history" prior to Bernie Madoff's crimes a decade later.

According to Hoffenberg, it was his espionage connections that helped him skate. During his work with Epstein, Hoffenberg says, he had a front-row seat to the espionage work that brought Epstein into close contact with foreign agents from Saudi Arabia, Israel, Russia and more.

I liked the book [Epstein: Dead Men Tell No Tales] a lot.

Unfortunately, the media doesn't understand 75% of the Epstein story.

Because it's a complicated story. Maxwell, the Crown, and spying. Of course, right now Prince Andrew is preventing the Southern District of New York from arresting Maxwell.

There is a problem, because [Alex] Acosta in 2008, the reason that Epstein didn't get any time and got a non-prosecution agreement was because of the intelligence agencies involvement with Epstein, and the two Maxwells, in Israel. I know that for a fact from Epstein.