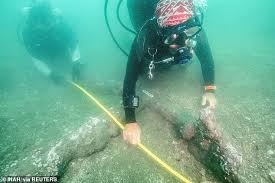 Archaeologists have discovered two iron ship anchors off Mexico's Gulf Coast that could have belonged to Spaniard Hernan Cortes' fleet, which landed in 1519 before overthrowing the Aztec empire.

The well-preserved anchors were found on the ocean floor near the former Spanish settlement of Villa Rica in southeastern Veracruz state and resemble those made in the 1500s, Mexico's National Institute of Anthropology and History (INAH) said on Monday.

Cortes famously destroyed the ships he and his crew used to sail to Mexico, forcing his small army of treasure-hunters to march inland.

There is a widely-held misconception that Cortez burned his ships - potentially from an incorrect translation of a Latin telling of the story - however they were more likely sunk.

The latest discovery, along with an anchor believed to be from the 15th century that was found last year, has reassured archaeologists that they are on track to find more artifacts documenting the European invasion of Mexico.

They have identified 15 other sites that may also turn up anchors, which could help pinpoint the spot where other Spanish galleons under Cortes' command might have sunk and increase the odds of finding wooden hulls and other remnants.

Cannabis was domesticated in north-west China around 12,000 years ago