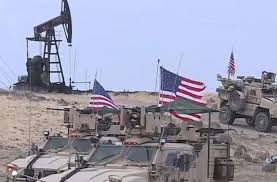 Though he had promised a withdrawal of U.S. troops from their illegal occupation of Syria, Trump shocked many with his blunt admission that troops were being left behind to prevent Syrian oil resources from being developed by the Syrian government and, instead, kept in the hands of whomever the U.S. deemed fit to control them, in this case, the U.S.-backed Kurdish-majority militia known as the Syrian Democratic Forces (SDF).

Though Trump himself received all of the credit — and the scorn — for this controversial new policy, what has been left out of the media coverage is the fact that key players in the U.S.' pro-Israel lobby played a major role in its creation with the purpose of selling Syrian oil to the state of Israel. While recent developments in the Syrian conflict may have hindered such a plan from becoming reality, it nonetheless offers a telling example of the covert role often played by the U.S.' pro-Israel lobby in shaping key elements of U.S. foreign policy and closed-door deals with major regional implications.