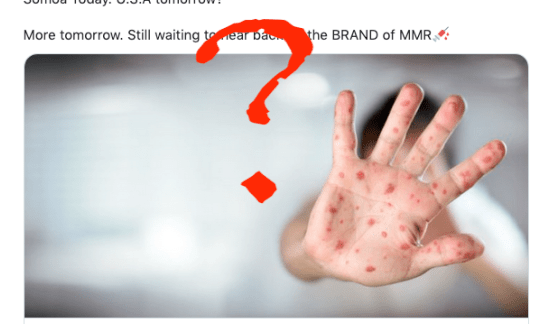 The mainstream media's vaccine sirens have been shrieking on a weekly basis this year, with the sound rheostat turned to MaxVolume by the CDC, UNICEF and WHO hysteria over infectious diseases. In the Democratic Republic of Congo, media outlets reported on a large measles outbreak, claiming in "official statistics" that more than 5,000 children died from this generally mild viral infection. How can that be so?

The BBC article continued on after its eye-popping headline about measles, hyperventilating:

"The World Health Organization (WHO) says this is the world's largest and fastest-moving epidemic."

"Measles in DR Congo has now killed more than twice the number who have died of Ebola there in the last 15 months."

"The Congolese government and the WHO launched an emergency vaccination program in September that aimed to inoculate more than 800,000 children."  [Emphasis by the BBC.]

This would be news if outbreaks of similar intensity occurred in first world countries, such as the United States or the European Union. But they don't. Nor do they occur in a similar scale or severity. This means that hygiene, nutrition, refrigeration, and potable water—items many in the modern world take for granted—are the real delta between measles deaths in the Third World versus mild measles cases in the first, which come and go, and rarely result in fatalities.

This has been a long-known and well-kept secret by the WHO, UNICEF, and medical institutions around the world even though it has never been discussed and certainly, it has not come forth in any scientific way.

As researchers for the United States Agency for International Development (USAID), Rochelle Rainey and Merri Weinger see it:

Modern infrastructure is the cornerstone of what reduces the spread of infection. Note, those environmentalist researchers didn't say vaccines were at the heart of disease reduction; it was improving human basic living needs.

In 2019, the largest measles outbreak in the US took place since 2000. While the CDC reported that infections occurred in 22 states, the total number with measles was a meager 695 cases of a formerly common childhood infection. Not a single fatality occurred among those who were infected. Between 2004 – 2015, there have been no measles deaths in the United States. Not one.

Additionally, scientists, doctors, and health agencies have known for years that the mumps component in Merck's MMR vaccine fails to protect. That explains why mumps outbreaks are occurring among young adults, decades after being vaccinated during childhood. Mumps cases have skyrocketed at universities since 2015, including Yale and Harvard, as well as an outbreak that lead to the quarantine of an active-duty U.S. Navy ship earlier this year.

Why is the defective MMR vaccine used in places such as Samoa, India, the Philippines, and most other emerging and third world nations? Why do first-world healthcare physicians keep using a broken vaccine that doesn't protect and can lead to devastating harm?

In 2017, questions about the mumps fraction of the MMR vaccine emerged from within the scientific community. Yet, instead of separating the MMR into three separate vaccines, reformulating and then retesting it, nothing changed with Merck. Such a logical and necessary step would undoubtedly cost the tens of millions of dollars. But it would cost them more than a lot of money: Changing the current MMR would impact the 'cult of vaccines' and disrupt the general public's 'faith' in this holy water.

In 2019, the leaders of Samoa closed its borders to travelers who did not have proof of vaccination records, including its own citizens. That hardline stance against measles means that for many American Baby Boomers who contracted measles as a child and have natural, true immunity and are either living in, or traveling to, Samoa must be given a jab against an infection their immune system had already conquered. The inoculation would not be solely for measles, but would also include a faulty attenuated mumps virus.

With more than fifty measles deaths claimed by the health experts in Samoa with the current outbreak, what is sadly no longer reported are the two deaths from MMR that rocked the Pacific Island nation in 2018. Two babies, less than two years of age, died shortly after receiving the MMR injection, causing an uproar. The Samoa prime minister "expressed his condolences" to the families and forced the country to temporarily pull the MMR vaccine from the market.

To the gasps of those who have had children injured by the MMR vaccine, Samoan authorities did not investigate what was wrong with the vaccine. Instead, authorities focused their probe on two nurses, charging them with two counts of manslaughter and declaring "nothing was wrong with the vaccine." Month's later, a still angry mother of one of the victims demanded "answers" for the death of her child. She clearly doesn't believe the line of propaganda being sold to her as truth.

A Collision of Statistics in the Congo

Thousands of miles away is a country in the middle of the African continent: The Congo, with a population of 5.5 million people, more than 28 times larger than Samoa. Thus, 5,000 measles deaths, if that number is believable, represent 0.091% of the entire Congo population.

In 2010, Congo was one of five nations, including China, that accounted for "half of the total number of under-five deaths globally." The WHO's findings reported that the major causes were pneumonia (24%), prematurity (20%), and diarrhea (13%).

Congo, like many sub-Saharan African nations, suffers from malaria, diarrhea from poor sanitation, and malnutrition that leads to premature death in babies. Add the lethal Ebola epidemic, which was declared a national emergency as the infection spread deep into the country, the statistics become complicated and the true causes of many deaths across the country are clouded.

These are the latest WHO Ebola statistics in the Congo:

Now take into account the measles vaccine which contains a live-attenuated virus. Whether it's kept frozen or not, the MMR vaccine sheds the genotype of the virus to all children. That further muddies the murky mortality statistics of the ailing and impoverished Congolese children.

Now add a fourth dimension to the measles deaths equation: Treatment of the infection. Acetaminophen (aka Tylenol) and paracetamol are used to treat fever, but they both have side-effects. Acetaminophen side-effects include trouble passing urine, "swelling of face, throat, lips, and tongue" and "hives, severe itching, peeling or blistering skin." In the latter three side-effects, could the skin hives, itches, and blistering from acetaminophen be mistaken for the measles?

In 2014, the U.S. Public Health Services (USPHS) conducted a study in Western Africa where the first Ebola epidemic occurred early in this decade. The study lists acetaminophen as one of the ten "essential medications" to be given to Ebola or suspected Ebola patients. The USPHS wasn't alone, however, in conducting the study.

"In 2014, the U.S. Public Health Service (USPHS) Commissioned Corps deployed to Monrovia, Liberia, to operate a 25-bed Ebola treatment unit (ETU) constructed by the U.S. Military. The ETU was named the Monrovia Medical Unit (MMU) and was constructed from an U.S. Air Force Expeditionary Medical Support (EMEDS) unit with modifications on the basis of consultation from Médecins Sans Frontières, the World Health Organization, and expert panels from the U.S. Department of Defense and Department of Health and Human Services."

Could the bulk of the 5,000 measles deaths be a case of mistaken identity? Could one of the medications given to immune-depleted Congolese children produce measles-like infections, with the authorities checking the cause of death due to measles, and not the side-effects from the Ebola medication? This author firmly believes so.

This is an image of the measles rash on the skin.

The image for the acetaminophen skin rash is not too different.

For African children with the measles, here are photos from the CDC on the infection.

From Nigeria there are additional photos of children with the measles.

Médecins sans Frontières' (MSF), the French phrase for Doctors Without Borders, is an international, independent medical and humanitarian organization. It operates in 17 of the 26 provinces in the Congo. MSF combats an array of health challenges including  HIV/AIDs, the wounded from conflicts, displacements of entire villages, and other equatorial zone diseases. Most notably, MSF was at the forefront of the two major Ebola outbreaks of 2018.

After years of setting up medical installations in Congo, is it any surprise that the locals have retaliated with threats, assaults, and shootings of doctors and medical staff? When people lose trust in foreigners garbed in lab coats and hospital scrubs, tensions rise and violence can pop at the smallest insult or cultural misunderstanding.

So, where does that leave the measles vaccination and Ebola treatment programs going forward in the future? Can pharma-sponsored officials and health agencies be truthful enough and transparent to suppress these clashes? That's hard to say but worth watching.

In many of the overhyped measles articles this year, an international body of research scientists claimed that the childhood infection can cause "immune amnesia" or "immune depletion" or "depletes the body's immune memory."

"… Measles virus wipes out 11 percent to 73 percent of the different antibodies that protect against viral and bacterial strains a person was previously immune to—anything from influenza to herpesvirus to bacteria that cause pneumonia and skin infections."

If true, can the MMR vaccine do the same with "immune depletion?" Does that happen with any other live-attenuated vaccine? The answer, for now, is no one knows.

What is the Truth

The WHO admitted that "Despite previous rounds of immunizations, the measles has spread to every part of the country."

History has shown that childhood measles cases, deaths, and outbreaks occurred in Pointe-Noire, Congo, between October 1984 and March 1985; Katanga province in 2010-2011; and across Pan Africa outbreak in 2012.