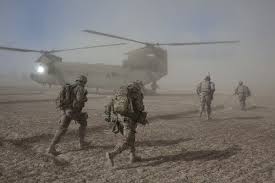 18 years and tens of thousands of lives and trillions of dollars too late, it's nice to see the media finally shame these scumbags and their government handlers. But they ought to save a big portion of the blame for themselves.

"In ten years or so, we'll leak the truth," the Dead Kennedys sang. "But by then it's only so much paper."

But it might just score you a Pulitzer Prize.

Award bait and bragging rights are no doubt the principal goals of The Washington Post's self-congratulatory data dump, "The Afghanistan Papers." As the headline implies, the 2000 pages that a court ordered the Office of the Special Inspector General for Afghanistan Reconstruction to release to Jeff Bezos' newspaper paints a Robert McNamara-esque portrait of not-so-best-or-bright Bush and Obama Administration bozos privately admitting what they knew all along—that the U.S. invasion and occupation of Afghanistan was always an unwinnable, counterproductive mistake—at the same time they were telling the American people that victory in the post-9/11 "good war" was right around the corner. All we had to win was win Afghan hearts and minds.

"The [I.G.] documents also contradict a long chorus of public statements from U.S. presidents, military commanders and diplomats who assured Americans year after year that they were making progress in Afghanistan and the war was worth fighting," the Post reported. "Several of those interviewed described explicit and sustained efforts by the U.S. government to deliberately mislead the public. They said it was common at military headquarters in Kabul—and at the White House—to distort statistics to make it appear the United States was winning the war when that was not the case."