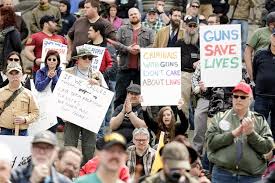 Conservatives have railed for years against so-called sanctuary jurisdictions, criticizing localities that refuse to cooperate with federal immigration policies they deem heartless and ineffective. In the past year, however, some conservative lawmakers have taken a page from the progressive playbook, employing sanctuary imagery in opposition to gun safety legislation they deem to be an unconstitutional restriction of their rights under the Second Amendment.

The two approaches are classic cases of false equivalency. Jurisdictions that proclaim themselves sanctuaries for immigrants do not seek to violate the law; they simply refuse to engage local law enforcement in supporting actions that are federal responsibilities. They do not block the law, but simply insist that it should be enforced by those who have the responsibility to do so. For some proponents of so-called gun sanctuaries, however, the goal is to prevent enforcement of state law that the jurisdiction (not a court) deems unconstitutional.

The Tazewell County, Virginia, Board of Supervisors recently jumped aboard the fast-moving Second Amendment sanctuaries train. In doing so, it embraced positions fundamentally at odds with state and federal constitutional law. Passing resolutions opposing certain laws or protesting governmental action is perfectly consistent with our traditions as a democracy, and no one should oppose the rights of citizens and their representatives to speak their minds. But Tazewell and a number of other localities across Virginia want to do much more. As Eric Young, an attorney and the county administrator, put it, "Our position is that Article I, Section 13, of the Constitution of Virginia reserves the right to 'order' militia to the localities. Therefore, counties, not the state, determine what types of arms may be carried in their territory and by whom. So, we are 'ordering' the militia by making sure everyone can own a weapon." Other counties are announcing different schemes if gun safety laws are enacted: For example, the Culpeper County sheriff pledged to deputize "thousands of our law-abiding citizens" so they can own firearms.