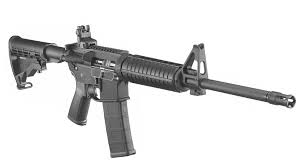 Virginia Governor Ralph Northam is backing a proposed ban on "assault weapons" that would prohibit the sale of many semi-automatic firearm designs like the AR-15, but would grandfather existing owners of the weapons so long as they are registered — or else face surrender.

The Governor's proposed ban is one of several gun control ideas being considered by the newly Democrat-controlled Virginia state legislature. According to Virginia Mercury, many Democratic party leaders are still deciding on a clear position for how they will deal with the classes of firearms and accessories they intend to ban, but that are already owned in the state.

Northam's proposal differentiates from another controversial gun control proposal by Sen. Richard Saslaw, which would not create a carve-out for existing owners who currently possess a firearm or firearm component that may eventually be banned under Virginia state law.

"In this case, the governor's assault weapons ban will include a grandfather clause for individuals who already own assault weapons, with the requirement they register their weapons before the end of a designated grace period," Alena Yarmosky, a spokeswoman for Northam, said in a Monday statement.

can anyone count the number of time the Democratic politicians said we are not after your guns? They as always are whizzing on gun owners and saying how it is only liquid sunshine.....