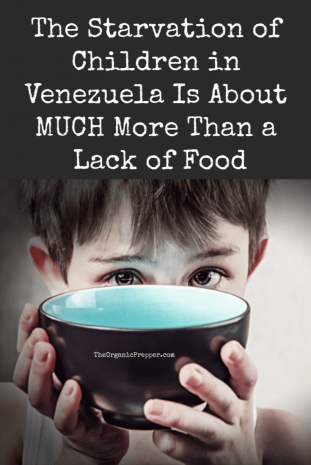 By now, you have probably seen the articles in the mainstream media about schoolchildren in Venezuela fainting at school because of the lack of food. The lack of food is only the tip of the iceberg. The starvation of our children is about much more than that.

Consequences of an unexpected situation are, in the best of situations, serious. In our case in Venezuela, these have been devastating for the most vulnerable people, children and elders.

By unexpected I don't mean this was sudden. On the contrary, I am firmly convinced, this was engineered and have mentioned it earlier. The reasons for this, I've tried to unmask it in previous articles, and the evidence I've collected will be released in the future.

The effects of food deprivation

Back on topic, this food deprivation has inherently generated the desired effect, though.

It has been inaccurately attacked. Regular living conditions can´t be sustained if you don´t have proper food, and please excuse my redundancy. Mental effort without food, will be largely detrimental for students in the long run. Find a good source of quality food, and then studies can start over again.

It could have been enstated 3 days week classes (some of this was done, but without any other means to cope with the hyperinflation people just stop assisting, teachers and kids), and some self-teaching assistance, but the will was just not there. They, the ruling mafia, need generations of weak, mentally inferior citizens. This started already in 2014. The plan has been running for 5 years now. Unless it´s stopped somehow…our future is gloomy.

Note from Daisy: And think about the control – what parent wouldn't do anything asked of them to get food for their children who are literally fainting from hunger? As Henry Kissinger said, "Who controls the food supply controls the people."

One of the ways to fight these horrendous consequences and avoid school children starving in the classroom is to instruct the community surrounding you, so they don't wait for so long.

One of the most shocking things I learned about this, was that parents were sending their kids to school without any food, because they were ashamed to NOT send him or her…because then everyone would know they had nothing to eat. I believe we have to agree on this: once you don´t have anything to feed your children for breakfast before going to school…it´s already too late. Those children were (are) already doomed to starvation and malnourishment.

The same thing happened in Argentina. People just remained and stood still in the cities, waiting. Assistance was not sufficient. Entire families committed suicide according to someone I know very well, and this person was actually there those years. The sudden financial decisions of the government to devaluate their currency (sounds painfully familiar to me) wiped out years of savings and left everyone almost in bankruptcy and homelessness.

I asked recently a cousin of mine why she was still there in the city, as she has other relatives in a small countryside town far away, and she told that life there was even harder. I told her that maybe at the beginning, but if there were products to eat and clean water for a bath, it would be much better than the city. But if people believe that they are going to make a career there, of course, they will have a rough time.