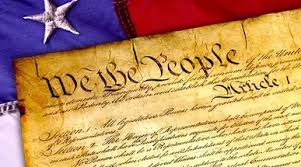 While Congress subjects the nation to its impeachment-flavored brand of bread-and-circus politics, our civil liberties continue to die a slow, painful death by a thousand cuts.

Case in point: while Americans have been fixated on the carefully orchestrated impeachment drama that continues to monopolize headlines, Congress passed and President Trump signed into law legislation extending three key provisions of the USA Patriot Act, which had been set to expire on December 15, 2019.

Once again, to no one's surprise, the bureaucrats on both sides of the aisle—Democrats and Republicans alike—prioritized political grandstanding over principle and their oath of office to protect and defend the Constitution.

Today, while everyone is distracted by the impeachment drama, Congress will vote to extend warrantless data collection provisions of the #PatriotAct, by hiding this language on page 25 of the Continuing Resolution (CR) that temporarily funds the government. To sneak this through, Congress will first vote to suspend the rule which otherwise gives us (and the people) 72 hours to consider a bill.