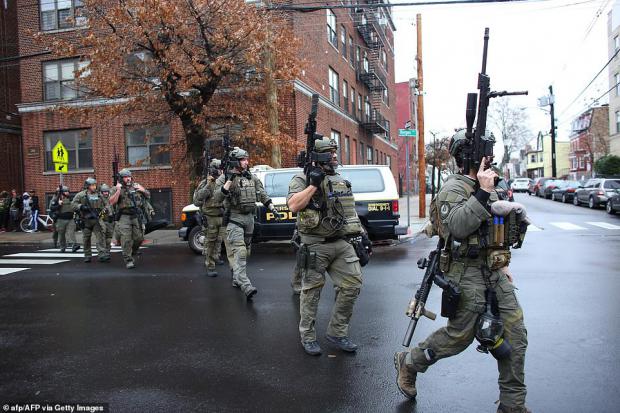 One police officer, three civilians, and two suspects are dead after a multi-hour SWAT standoff at a kosher market in Jersey City.

The Hudson County Prosecutor's Office confirmed that one police officer - a 39-year-old married father of five - was fatally shot and two others were wounded along with a civilian in the active shooter situation on Martin Luther King Drive on Tuesday afternoon.

An unnamed federal law enforcement source told Fox News that two juvenile suspects - one male and one female -  were shot and killed in a stand-off with police, along with three other people who were inside the bodega. A third suspect, described by the source as a black male wearing all black, is still at large.

The suspects are believed to have arrived in the area in a U-Haul rental van, where police found devices they described as 'pipe bombs', according to nj.com. Authorities are now searching for the person who rented the vehicle.

Gunfire erupted outside the JC Kosher Supermarket just after 12pm as police officers reported over radio that two armed suspects armed with long guns had barricaded themselves inside and were shooting at anyone who approached the storefront.

The gunshots continued for the next two hours, according to witnesses, as a heavy police presence from local, state and federal law enforcement agencies flocked to the scene and 12 schools in the county were placed on lockdown.