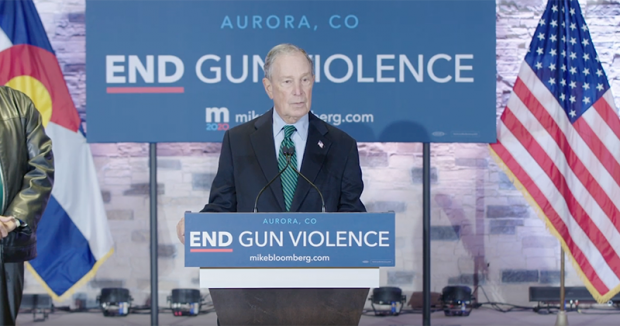 Democratic presidential candidate Michael Bloomberg has announced a radical anti-Second Amendment program, calling for outright bans and a requirement for every gun buyer to obtain a permit.

Appearing in Aurora, Colorado Thursday, the location of the 2012 movie theatre shooting, Bloomberg vowed to put an end to a "nationwide madness" where firearms are concerned.

"I'm just getting started," Bloomberg declared, adding that "As president, I will work to end the gun violence epidemic once and for all."

"I promise you I will never back down from this fight," he said. "That's the kind of president this country needs and you deserve."

Bloomberg went on to outline a gun control plan that includes every proposal that has ever been attempted, and has failed.

These include proposals to:

Reinstate the federal ban on assault weapons and high-capacity magazines.

Require every gun buyer to obtain a permit before making a purchase.

Institute a new age limit of 21 for those wishing to buy handguns, semi-automatic rifles and shotguns.

Require a mandatory 48-hour waiting period for all gun purchases.

Institute a federal "red flag" law to deny permits to "troubled people who pose a danger to themselves or others."

Institute a temporary ban on gun possession for those convicted of assault or other violent misdemeanors.

Ban all guns in K-12 schools, colleges, and universities, except for law enforcement.

Reverse the law that gives gun makers and gun dealers immunity from lawsuits.