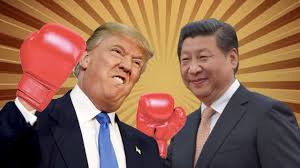 Before breaking under the pressure to pass the Hong Kong Human Rights and Democracy Act on November 27, Trump attempted desperately to push against the hard liners stating a day earlier:

Of course, Trump's desire to use protective tariffs, rebuild decayed infrastructure and industries while reversing the regime change wars abroad are good things. However, the ugly fact is that the Trans-Atlantic financial system is also set to crash, and a serious military confrontation between the US military and the Russia-China alliance is both very real and very dangerous.

This is also why the passage of the anti-Beijing Bill on November 27 is so tragic, since the desperately needed economic alliance which Trump has desired may have suffered a wound from which it cannot recover. Not only this, but those anti-China hawks pervasive across Washington are now emboldened to go even further starting with Sen. Ted Cruz's new bill to recognize Taiwan's sovereignty, thus undoing the 1972 'One China' agreement which established Beijing as the capital of China.