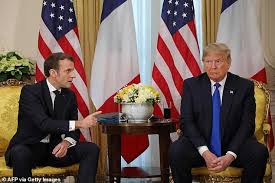 President Donald Trump needled French President Emmanuel Macron over a heated dispute about accepting captured ISIS fighters – offering to 'give them to you' – after kicking off meetings in London with an attack his 'nasty' comments about NATO.

But the two national leaders appeared to patch things up after Trump's fighting words in the morning at the start of a day of meetings. The two sparred during a joint news conference, but Trump cast a trade row as a 'minor dispute' that would soon be looking 'rosy.'

By the evening, Trump offered the French president a ride in the 'Beast,' his government armored limousine, on a ride to 10 Downing Street for a reception with British Prime Minister Boris Johnson.

Earlier, seated alongside Macron on his first day of meetings here, Trump took a dig at Macron for France and other European nations being reluctant to accept nationals from their own countries who joined the fight alongside ISIS terrorists.

Trump turned to his counterpart and asked: 'Would you like some nice ISIS fighters? I could give them to you.'