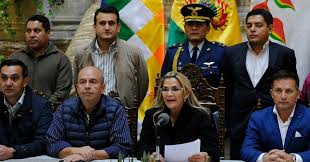 In 2005, I sat in a lounge off the Senate chamber in La Paz, Bolivia, waiting for an interview. I was wearing my best coat and tie. With my thinning hair and gray mustache, I could pass for a Bolivian of European descent. In fact, numerous people smiled and said "buenos días," as if I was a familiar face.

The senators were mostly white men, reflecting the makeup of Bolivia's political elite at that time. But that changed just a few months later with the election of Evo Morales and his party, Movement Toward Socialism (MAS).

Morales's government nationalized natural gas and electric companies, defying both the US and the Bolivian oligarchy. So it's not surprising that those forces now denounce Morales as a dictator and cheer his overthrow.

Bolivia held elections on October 20 this year. Opposition leaders, claiming vote fraud, organized mass, anti-government demonstrations. Sectors of the military and police sided with the opposition. Morales, his vice president and other top government leaders resigned under military pressure. Some went into exile in Mexico.

Caitlin Johnstone: How Long Before We Humans Are Being Policed by Robots?