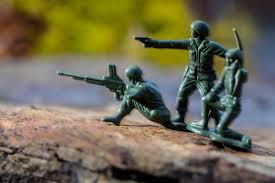 On April 9, 1942, 12,000 U.S. troops paid the price of U.S. empire and intervention when they surrendered to Japanese forces at Bataan, Philippines. During the resulting "Bataan death march," 600 of them died, and then another 1,000 died after they were transported to Japanese POW camps. The Constitution called into existence a limited-government republic. No Pentagon, no CIA, and no NSA. Just a relatively small military force. No foreign military empire, no foreign colonies, and no U.S. military bases in foreign countries. That system lasted for more than a century.

By the same token, the original foreign policy of the United States was one of non-intervention in the affairs of other nations. No coups, foreign wars of aggression, foreign aid, state-sponsored assassinations, alliances with foreign regimes, or regime-change operations. That system too lasted about a century.

Notwithstanding the horrors of slavery, America's limited-government structure and its non-imperialist, non-interventionist foreign policy were among the factors that led to the greatest and longest surge  in liberty, peace, prosperity, and standards of living in history.

The turn toward empire and intervention began with the Spanish American War, a watershed event that would lead to those 12,000 U.S. troops surrendering to Japanese forces almost 45 years later. The argument was that in order to be a great nation, America needed to acquire overseas colonies, just like the British and Spanish Empires.

During the Spanish-American War, Filipinos were fighting for independence from Spain. The U.S. government intervened in the conflict, with the ostensible aim of helping the Filipinos win their independence. It was a lie, one that the Filipinos discovered soon after Spain capitulated. In fact, the real aim of U.S. officials was simply to replace Spanish rule with U.S rule.

The Filipinos decided to keep fighting, this time for independence from the United States. U.S. forces brutally put down the revolt, killing and torturing hundreds of thousands of Filipinos in the process. After the U.S. conquest of the Philippines, U.S. officials took military control over the islands, constructed many military bases, and stationed thousands of U.S. troops there.

That's why those 12,000 U.S. troops were there when Japan attacked the islands. The turn toward empire and intervention in 1898 put U.S. forces there and had kept them there for more than four decades of U.S. colonial rule.

The Spanish American War was followed by U.S. intervention into World War I. There had been no invasion of the United States. Nonetheless, President Wilson decided that he would intervene in the war with two aims: (1) to put a permanent stop to European wars by defeating Germany decisively; and (2) making the world "safe for democracy." To accomplish is war aims, Wilson had to conscript (i.e, force) American men into fighting his war.

It was a disaster, and the American people knew it. More than 50,000 American men were killed in combat, and for nothing. Despite the total victory achieved against Germany, within a short time Adolf Hitler and his Nazi Party rose to power in Germany, and war clouds were forming over Europe once again. So much for Wilson's "war to end all wars" and to "make the world safe for democracy."

Not surprisingly, the American people were overwhelmingly dead-set against U.S. involvement in another European war. President Franklin Roosevelt said he was too, as reflected by his statement to the American people during his 1940 presidential campaign, "I have said this before, but I shall say it again and again and again: Your boys are not going to be sent into any foreign wars."

It was a lie. In fact, Roosevelt was secretly trying to do everything he could to embroil the United States in the war.

So, why didn't FDR simply send U.S. troops into battle, as U.S. presidents do today? During that time, presidents were still complying with the declaration-of-war provision in the U.S. Constitution, a provision that interventionists today say is "antiquated." That provision prohibits the president from waging war against another nation-state without first securing a declaration of war from Congress. The Framers inserted that provision to protect the American people from presidents who were overeager to embroil the nation into war.