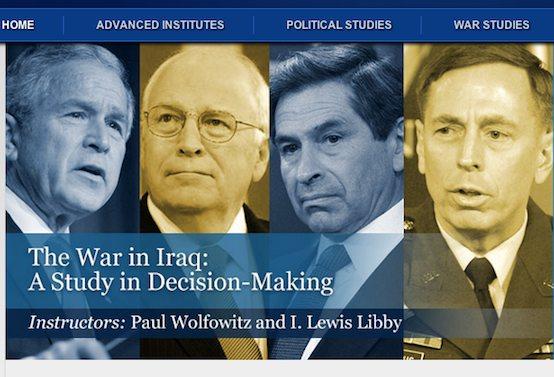 Authored by Daniel Larson via TheAmericanConservative.com,

For some bizarre reason, The New York Times asked Paul Wolfowitz to write about U.S. foreign policy in the Middle East:

If we abandon the allies who made possible the victory over ISIS, and perhaps now also abandon the Afghan allies who enabled us to drive Al Qaeda out of their country in 2001, the United States will make the same mistake as Mark Twain's cat, viewing everything in the greater Middle East through the prism of the painful experiences of the "hot stoves" — the Iraq and Afghanistan wars [bold mine-DL]. Abandoning allies who have advanced American interests, while fighting courageously for their own, is not a formula for avoiding another large-scale United States military engagement in the Middle East, but rather for ending up in another one. Next time, however, will be without the local allies we need.

Before we get to Wolfowitz's argument, such as it is, can we just marvel at the shamelessness of Wolfowitz when he presumes to lecture anyone about sound foreign policy decision-making? Wolfowitz was one of the most enthusiastic supporters of the invasion of Iraq, and in his role at the Pentagon he was also one of the top officials most responsible for the ensuing debacle. He then has the gall to liken that war and the war in Afghanistan to "hot stoves," as if the consequences of these wasteful wars were no more than being briefly burned. What an awful way to trivialize almost two decades of failure and massive loss of life.

No one needs to hear from Wolfowitz on this or frankly any other foreign policy issue. There must be dozens of other writers who would argue for the same general position without helping to rehabilitate one of the architects of the biggest U.S. foreign policy blunder in the last forty years. If we want to know why there is no accountability in U.S. foreign policy, this Wolfowitz op-ed is Exhibit A. Former officials and policymakers can get things as wrong as can be, advocate for truly disastrous policies that claim hundreds of thousands of lives, and yet their opinions will still be taken seriously and published as if nothing had ever happened. There have been no professional or legal consequences for the officials responsible for the great crime that was the Iraq war, and instead they are asked for their advice on what the U.S. should do next in the same region that they set on fire.