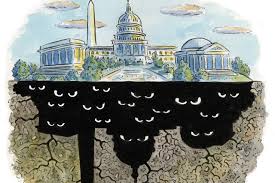 The fourth is what for decades now has been called a "headless fourth branch of government," the administrative state.

As early as 1937, in a "Report of the President's Committee on Administrative Management," the authors write:

Without plan or intent, there has grown up a headless "fourth branch" of the Government, responsible to no one, and impossible of coordination with the general policies and work of the Government as determined by the people through their duly elected representatives.

The problem of waste and lack of accountability in this fourth branch, the report notes, has "been clearly recognized for a generations and ha[s] been growing steadily worse decade by decade."

The Spoils System and the Permanent Bureaucracy

The report isn't wrong. By the late nineteenth century, "civil service reform" had ended the old system "spoils system" and the advent of lifelong "professional" civil servants, brought the establishment of a bureaucratic class which saw its interests and loyalties as separate from the elected civilian government. This detachment from elected policymakers meant the administrative state was not terribly concerned with either efficiency of responsiveness to the public. It became an interest group all its own, but with far more power than any ordinary interest group.