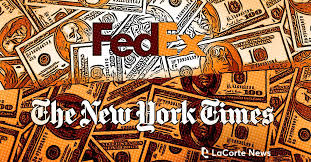 The article, which largely aims to be an indictment of the Trump tax cuts, centered on FedEx as a primary beneficiary of them. " In the 2017 fiscal year, FedEx owed more than $1.5 billion in taxes," the piece begins. "The next year, it owed nothing."

FedEx didn't take to kindly to the news, and in response, their CEO issued the New York Times reporter responsible for the article to a debate.

The CEO of FedEx challenged the publisher of The New York Times to a public debate on tax policy after an article in the paper detailed how the shipping giant effectively owed no taxes in fiscal 2018. The windfall came as a result of the Trump Administration's tax overhaul.

In a statement posted on the FedEx website, Smith fumed that the Times article was a "factually incorrect story," and an "outrageous distortion of the truth" without pointing to specific inaccuracies.
Smith also took the Times to task for its own federal income tax payments, saying that that "unlike FedEx, the New York Times paid zero federal income tax in 2017 on earnings of $111 million, and only $30 million in 2018 — 18% of their pretax book income."