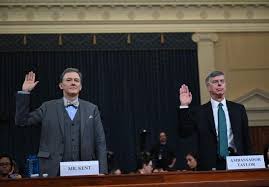 "What clearly concerned both witnesses wasn't simply the abuse of power by the President, but the harm it inflicted on Ukraine, a critical ally, under constant assault by Russian forces."

"'Even as we sit here today, the Russians are attacking Ukrainian soldiers in their own country, and have been for four years,' Taylor said. 'I saw this on the front line last week; the day I was there a Ukrainian soldier was killed and four more wounded.'"

Kent compared Ukrainian resistance to Russia's intervention on the side of the Donbass secessionists to "our own Minutemen in 1776."

"More than 13,000 Ukrainians have died on Ukrainian soil defending their territorial integrity and sovereignty from Russian aggression. … American support in Ukraine's own de facto war of independence has been critical."

"The American colonies may not have prevailed against British imperial might without help from transatlantic friends after 1776.