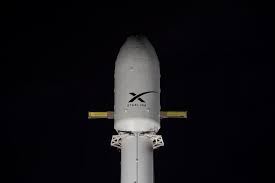 Using a Falcon 9 booster launched three times before, topped by a fairing that it captured and then refurbished earlier in the year, the company today launched 60 of its Starlink satellites into orbit, furthering its plans to create cheap worldwide internet at the same time.

Remarkably, in the space of just a few years, SpaceX's rocket landings have become almost routine, using thrusters to slow down the descent and land on an ocean platform or landing pad with pinpoint accuracy. But a less sophisticated part of its strategy involves using a giant net mounted to a ship to catch the fairings that protect space-bound payloads before falling back to Earth.

It may seem small compared to the rocket body itself, but these fairings cost SpaceX around US$6 million a pop, CEO Elon Musk has said previously. An ability to reuse them could take another chunk out of the launch costs of the company's rockets, which stand at around $62 million per flight for the Falcon 9, and $90 million for the Falcon Heavy.

In June as part of the company's landmark Falcon Heavy launch, SpaceX managed to recover half of the payload fairing as it dropped back to Earth. It did so using its vessel named Ms Tree, which caught the fairing half after parafoils slow down its descent toward the ocean.