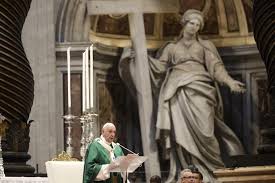 Such reforms have been pushed for decades by many German bishops and lay groups who hope it can lead to the liberalization of centuries of Roman Catholic tradition.

There is resistance elsewhere for the proposal, however, with the conservative Catholic establishment making sure its voice is heard as Pope Francis prepares his own document — expected by year's end — that could determine whether married priests and female deacons eventually become a reality in the Amazon.

Bishop Franz-Josef Bode from Osnabrueck, Germany, welcomed the proposals and suggested that a European synod similar to last month's assembly by the Amazon bishops could be a useful way to address pressing issues on the continent.

He told the Osnabrueck Diocese paper Kirchenbote that while the Amazon Synod's recommendations would not be transferable one-to-one in Europe, they might show the way forward to a similar type of priesthood in Germany that allows for combining work and family.

"Regarding the role of women in our societal and ecclesiastical situation, the recommendations are a tail wind for our efforts so far," Bode said.