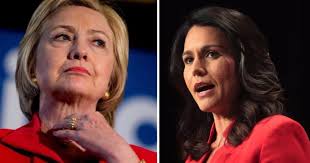 At the time, Representative Gabbard was everything the Democratic Party alleges to care about as a walking embodiment of cultural diversity.  Gabbard was one of the first female combat veterans elected to Congress and a member of both a religious and ethnic minority (as the first Hindu and American Samoan ever to sit in Congress).  Being from Hawaii, Gabbard is also an avid surfer and is active in both physical conditioning and martial arts training.  As a young, fit, and socially dynamic progressive woman committed to public service and ending wasteful regime-change wars, she was showered with praise from party leaders as she was unanimously elected to serve as Vice Chair of the Democratic National Committee:

"Congresswoman Gabbard's story is an inspiration and her dedication to public service showcases the best of our party's values." ~Former DNC Chairwoman Debbie Wasserman Schultz.

"I think she's wonderful. She's been in combat in a leadership role, and she knows how to lead. She deals well with men and women, young and old, Republican and Democrat. She's got an extraordinary political talent."  ~Democratic House Majority Leader Steny Hoyer