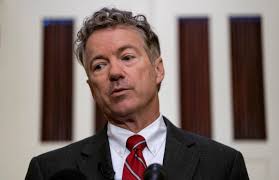 Monday on Fox News Channel's "Tucker Carlson Tonight," host Tucker Carlson questioned Sen. Rand Paul (R-KY) as to why Sen. Lindsey Graham (R-SC) had not been aggressive employing his subpoena power as the chairman of the Senate Judiciary Committee against various central figures involved with the effort to derail Donald Trump's 2016 presidential campaign and his presidency.

Paul explained he had urged Graham to act. However, he said there were other Republican members of the U.S. Senate that had more of an "allegiance" to the so-called Deep State than Trump.

CARLSON: So I don't want to single out, I don't want to be, you know, unfair to any particular senator. But I would tell you that I hear a lot from our viewers, you know, what is the answer? How did this start? Lindsey Graham is the Committee Chairman. He claimed he would get to the bottom of it. Why hasn't he?

PAUL: Well, not just any senator can do this. So I can't call a committee hearing and drag these people in. Senator Graham has the power. He is the Chairman of a powerful committee, the Judiciary Committee. And yes, I've encouraged him publicly and privately to do this.