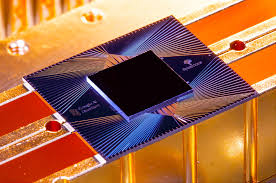 A Google quantum computer has far outpaced ordinary computing technology, an achievement called quantum supremacy that's an important milestone for a revolutionary way of processing data. Google disclosed the results in the journal Nature on Wednesday. The achievement came after more than a decade of work at Google, including the use of its own quantum computing chip, called Sycamore.

"Our machine performed the target computation in 200 seconds, and from measurements in our experiment we determined that it would take the world's fastest supercomputer 10,000 years to produce a similar output," Google researchers said in a blog post about the work.

The news, which leaked into the limelight in September with a premature paper publication, offers evidence that quantum computers could break out of research labs and head toward mainstream computing. They could perform important work like creating new materials, designing new drugs at the molecular level, optimizing financial investments and speeding up delivery of packages. And the quantum computing achievement comes as progress with classical computers, as measured by the speed of general-purpose processors and charted by Moore's Law, has sputtered.

Quantum computing researcher Scott Aaronson likened the step to landing on the moon in terms of momentousness. And in a tweet Wednesday, Google Chief Executive Sundar Pichai called it a "big breakthrough."

A vast industry is devoted to improving classical computers, but a small number of expensive labs at companies such as Google, Intel, Microsoft, Honeywell, Rigetti Computing and IBM are pursuing general-purpose quantum computers, too. They're finicky devices, running in an environment chilled to just a hair's breadth above absolute zero to minimize the likelihood they'll be perturbed. Don't expect to find a quantum computer on your desk.

However, physicist Jim Preskill, who came up with the term "quantum supremacy" in 2012, dashed some cold water on that idea. Google's chosen test was good for showing quantum computing speed but "not otherwise a problem of much practical interest," Preskill said in October after the paper's premature release.

Nearly every digital device so far, from ENIAC in 1945 to Apple's iPhone 11 in 2019, is a classical computer. Their electronics rely on logic circuits to do things like add two numbers and on memory cells to store the results.

Google quantum computer looks nothing like a conventional machine. When running, all this complexity is hidden away and refrigerated to near absolute zero.

Quantum computers are entirely different, reliant instead on the mind-bending rules of physics that govern ultrasmall objects like atoms.