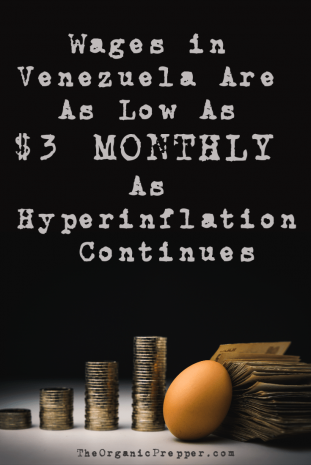 We're talking about the equivalent of $3 USD per month. The inability of the government (by far the largest employer in Venezuela) to provide raises as this hyperinflation destroyed the remaining acquisitive power people once had and condemned millions of people to misery, hunger, and deprivation.

This has originated a myriad of protests and demonstrations all over the country. Entirely useless, as the country is not a democracy nor there are any high-level functionaries that are going to do something. They're too busy trying to evade the sanctioning of other countries while looting whatever is left of the national treasure.

The few actions taken are just for propaganda, the most powerful tool of the communist world.  That's why a highly educated population will never be subject to such a level of manipulation.

The problem is so complex, that it´s going to be impossible to explain in such limited space. I have been trained (mostly because of my line of work and my studies) to think logically and to expand my field of vision to notice some aspects that normally people without so much training don´t see. Those who know me personally know that I don´t talk too much about stuff I am not sure of.

Here's why the collapse of Venezuela was engineered.

In this instance, I will allow myself to make an assumption because there are strong indicators that can support my theory. Our collapse was engineered. There is no simple reason to have committed suicide by condemning our main income source, the oil industry, to oblivion.

This is not a political article by any means. This is an article written by the request of one of my readers of the Prep Club Facebook group.