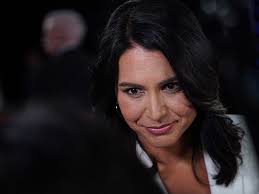 In a video released Sunday on Twitter, Gabbard talks about the origins of her long-simmering feud with Democratic leaders, dating back to her support for the insurgent campaign of Sen. Bernie Sanders (I-VT) in 2016.

Gabbard resigned from her post within the Democratic National Committee (DNC) in protest at the way then-chair Rep. Debbie Wasserman Schultz (D-FL) was treating Sanders. Her concerns were later vindicated by Wikileaks, which released emails showing that party leaders had conspired to help Clinton secure the nomination, forcing Schultz to resign.

In Sunday's video, Gabbard recalls: "People warned me in 2016 that my endorsement of Bernie Sanders would be the end of my 'political career.' They said, 'Clinton will never forget,' that 'she and her rich and powerful friends, her allies in politics and the media, will make sure that you are destroyed.'"

Gibbered then refers to the "countless hit pieces" against her in the mainstream media, the most recent of which was an Oct. 11 article in the New York Times painting Gabbard as a right-wing extremist. (The Times hosted the fourth primary debate just three days later, and the article — which lacked any evidence — was seen by some as an effort to marginalize Gabbard after she had attacked Sen. Kamala Harris (D-CA) effectively in the second debate.)

Citing her 16 years of military service in the U.S. Army National Guard, and her congressional service on national security committees, Gabbard rebukes Clinton and others for "falsely portray[ing] me as a traitor."