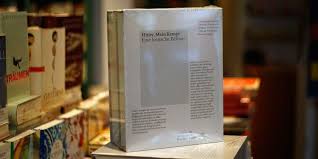 History seldom repeats, but there are instances where it rhymes -- and maybe Dalio is right about the direction the world is headed.

As the rise of nationalism and populism flourishes throughout Europe, several reports, mostly from French sources, say for the first time since 1934, a publisher in France will start selling "Mein Kampf" ("My Fight"), the book written by Adolf Hitler in 1925.

The book will be released to the public in France in 2020, will be accompanied by a critical edition written by fifteen French and German historians, reported Le Journal du Dimanche.

Initially, the reissue of "Mein Kampf," was announced in 2015, but the news of it caused a tremendous uproar that plans for reissue were quickly shelved by publishing house, Fayard. "The Fayard publisher intends to carry out as planned the publication of "Mein Kampf "- which falls into the public domain in January 2016 - in a new translation by Olivier Mannoni that will be authoritative," said the publisher in 2015.