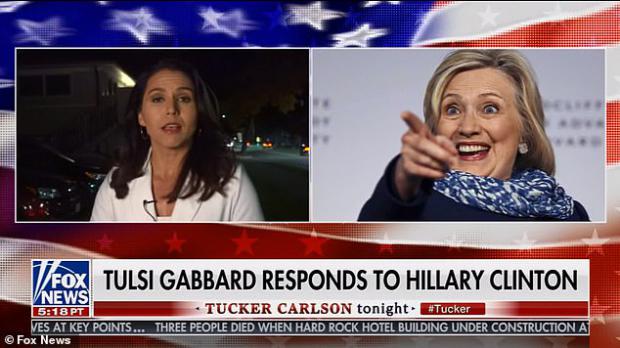 Democratic presidential hopeful Tulsi Gabbard assailed Hillary Clinton for 'having blood on her hands' after the former Secretary of State claimed that Russia was grooming the congresswoman from Hawaii to be a third-party candidate.

'Thousands of my brothers and sisters in uniform were killed in Iraq, a war that she championed,' Gabbard told Fox News on Friday.

'Their blood is on her hands. That's why she's smearing my character and trying to undermine my campaign.'

Clinton, the Democratic nominee who lost to Donald Trump in the 2016 election, told a podcast hosted by former Obama aide David Plouffe on Friday that Gabbard is a 'Russian asset'.

'I'm not making any predictions but I think they [the Kremlin] have got their eye on somebody who is currently in the Democratic primary and are grooming her to be the third-party candidate,' Clinton said.

'She's the favorite of the Russians... They have a bunch of sites and bots and other ways of supporting her so far.'