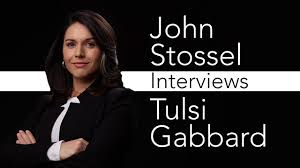 Rep. Tulsi Gabbard (D–Hawaii) will be in the Democratic debate next week. John Stossel says that's good, because she's different from the other Democrats.

One difference is that she served in Iraq, and now pushes for ending wars. "We have to honor our servicemen and women by only sending them on missions that are worthy of their sacrifice," Gabbard tells Stossel.

Instead, American interventions are often open-ended. "There's seldom a discussion that I've heard about what is our mission," Stossel says.

"Exactly! That's exactly the problem…what is the clear, achievable goal?" Gabbard responds. She says her Afghanistan policy would have been: "Go in. Defeat Al-Qaeda. Get out."

Gabbard also says: talk with our enemies. She met with Syria's dictator. The media and other Democratic candidates give her grief for that.

CNN's Chris Cuomo lectured her: "You need to acknowledge that Bashar al-Assad is a murderous despot."