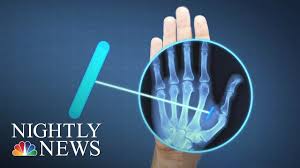 NBC News celebrated the prospect of "millions" of people getting a microchip implanted in their hand as a likely future outcome.

The segment is introduced by pointing out that people who have taken the chip do not need to carry keys, ID, credit cards or money.

It points out that embedding microchips in humans has long been a feature of dystopian fiction like Black Mirror, but that in Sweden "the microchips are already here."

The piece also celebrates how the same contactless technology has "made cash pretty much obsolete in Sweden."

A woman is seen receiving an implanted microchip while commenting, "I thought it would be fun, right?"

"The process is simple and swift, a pinch of the skin and in a matter of seconds the chip is inserted – the transformation is completely, the reporter Sarah Harman breezily comments as a man receiving the implant says he felt no pain.

In a half-hearted stab at objectivity, the piece then features two brief interviews from Swedes who offer lukewarm opposition.