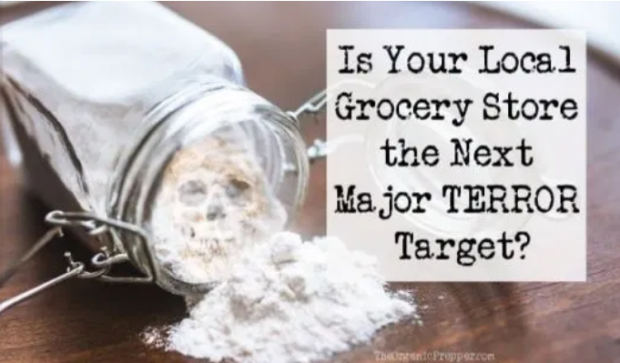 "What if terrorists used fentanyl to poison our food supply?"

This was the frightening thought that raced through my mind while scrolling through Facebook. I came across an article with an image of a lethal dose of the opioid drug next to a penny. It was shocking how such a tiny amount of this white powder could kill a single adult.

I couldn't help but wonder how easily this tiny amount of white powder could be mistaken for flour or powdered sugar. What would happen if a terrorist got a job at a flour or a sugar company and mixed this drug into the product? How many people would die before authorities could figure out what happened?

I know, what a scary thought, right?

I have a need to identify threats and actionable steps to protect myself and my family. I engaged my Google-fu, and here is what my research found. It's not good, but there are steps you can take to secure a safe food supply for you and your loved ones.

Fentanyl is a highly-potent, synthetic opioid drug. It has legitimate uses for extreme pain management, such as with some cancer patients. Fentanyl, both legally and illegally made, is currently the leading cause of opioid overdoses. From the article that showed the photo above that started me down this rabbit hole:

Fentanyl has also been named the leading cause of opioid overdose deaths.

"Fentanyl, the third wave of this crisis, has an unmatched potency. Across the country, it has been showing up in other drugs – or worse, billed as another drug entirely," said Energy and Commerce Committee Chairman Greg Walden (R-OR) and Health Subcommittee Chairman Michael C. Burgess, M.D. (R-TX). "It's easy and cheap to illicitly manufacture, making it easy for bad actors to change the formula – or analogues – to keep it just shy of getting caught. (source)

How does Fentanyl get into the US?

Fentanyl, like most of our pharmaceuticals, is manufactured in China. There are a variety of ways this legal fentanyl can be administered.

Fentanyl is typically administered intravenously (IV), intramuscularly (IM), transdermally (TD) as skin patches (Durogesic DTrans; Fencino; Fentalis), intranasally (IN) in the form of a volatile nasal spray (Instanyl or PecFent, and intrathecally (IT). It is also available as a buccal soluble thin film (Breakyl), which can dissolve in the mouth, similarly to the sublingual tablets (Abstral or Recivit). However, in contrast to other opiates, it is less common to find forms of the synthetic drug as oral tablets or powders. (source)

Some of the legally manufactured fentanyl falls into the hands of drug dealers here in the US. The precursor chemicals needed to manufacture illegal analogs of fentanyl are also largely sourced from China.

Mexican drug cartels have found fentanyl analogs cheap and easy to manufacture. They simply import the needed chemicals from China, synthesize it, and then sell their DIY fentanyl through the same channels that they sell other drugs. Fentanyl is often mixed with heroin or cocaine without the user knowing.

This is not just a problem in the United States. Canada is also seeing a rise in "street fentanyl" abuse.