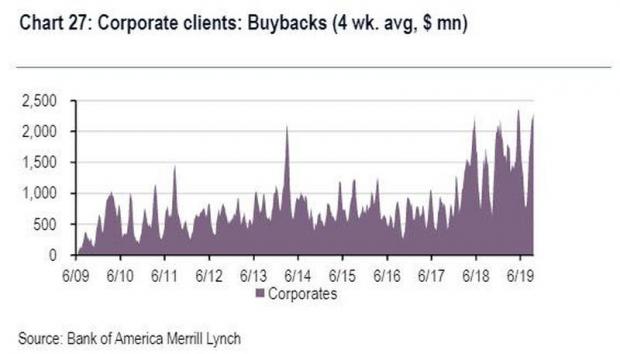 ... while insiders quietly dump stock, selling an estimated $26BN of their own stock in 2019, the fastest pace since the year 2000, when executives sold $37bn of stock amid the giddy highs of the dotcom bubble...

... retail investors are acting as if a financial crisis is just around the corner.

A recent report by Bank of America found that retail investors haven't been this bearish since the collapse of Lehman. The bank looked at money market fund flows, which attracted a near record $322 billion in the past 6 months, the largest since the second half of 2008 when the global financial crisis was unleashed.

As BofA explains, this means that instead of putting their money to work, investors are doing the opposite and raising cash at a furious pace, expecting a market crash, even though - just like in like 2007 and 08 - rates are now falling, while the S&P 500 put-call ratio has soared to the highest since April 10.

One explanation according to BofA's chief investment strategist, Michael Hartnett, is that investors are suffering from "bearish paralysis," driven by unresolved issues such as the trade war, Brexit, the Trump impeachment investigation and recession fears. Underscoring this point, in the week ending Oct. 9, investors continued to aggressively exit equity funds globally, with outflows reaching $9.8 billion according to EPFR data, while allocating cash to safe havens, with bond funds enjoying $11.1 billion of inflows.