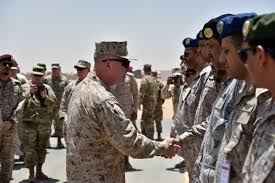 The U.S. military is significantly increasing troop deployments to Saudi Arabia, the Pentagon said Friday, announcing that 3,000 American personnel — including two fighter squadrons and an air expeditionary wing — will be sent to the Persian Gulf nation, as well as advanced missile defense systems.

U.S. officials said Saudi Arabia explicitly asked the Washington to send additional forces to the region, and that the latest move is in response to last month's attack on Saudi oil facilities that the Trump administration, Riyadh and European powers have all blamed on Iran.

One official speaking on condition of anonymity with The Washington Times said administration officials have recently been carefully considering "moving more and more troops into Saudi Arabia."

Defense Secretary Mark Esper authorized the new deployment weeks after the administration had already sent 200 air and missile defense soldiers to Saudi Arabia in response to the Sept. 14 attack on Saudi oil facilities, as well as an Army Patriot missile defense battery.