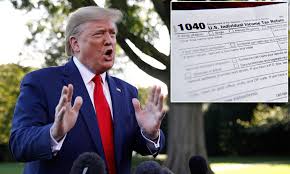 In a 2-1 ruling, judges on the U.S. Court of Appeals for the District of Columbia Circuit said House Democrats can enforce a subpoena for the documents.

The ruling upholds a lower court's decision, leaving the president's attorneys with few ways to block his accountants, Mazars LLP, from complying with the House Oversight Committee's demands.

Trump could ask for a new decision from the full D.C. Circuit appeals court. That typical next step would leave him with only the U.S. Supreme Court as a last resort if he loses again.

An administration official with knowledge of the case said Friday that Trump will 'in all likelihood be headed to the Supreme Court for [legal] relief.'

The high court could refuse to hear the case. It could also grant a hearing and press pause on the subpoena while the dispute winds its way toward a final resolution in 2020 – while Trump is in the thick of a re-election fight.

His attorneys Trump had argued that U.S. District Judge Amit Mehta should have reversed the subpoena.

And the president had sued the House committee in April, arguing unsuccessfully that investigating his personal finances from years predating his time in office goes beyond the constitutional powers of Congress.